The four-team College Football Playoff is set, and it will consist of Georgia, Michigan, TCU and Ohio State.

It’s no surprise that the top two seeds are favored, as both Georgia and Michigan opened as the betting favorites at Caesars Sportsbook. 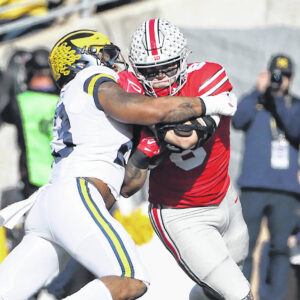 Georgia was able to remain undefeated after a 50-30 SEC Championship win over LSU, and they’ll be taking on an Ohio State team who’s only loss was to No. 2 Michigan.

Ohio State was able to leapfrog Pac 12 runner-up USC, and while there were some that were advocating Alabama to move up as well, TCU remained in the top four despite falling 31-28 in overtime to Kansas State in the Big 12 Championship Game.

TCU stayed at No. 3, and they’ll be matched up against a 13-0 Michigan team that was able to cruise past Purdue 43-22 in the Big Ten Championship Game.

The rest of the college football bowl matchups will be announced later today.