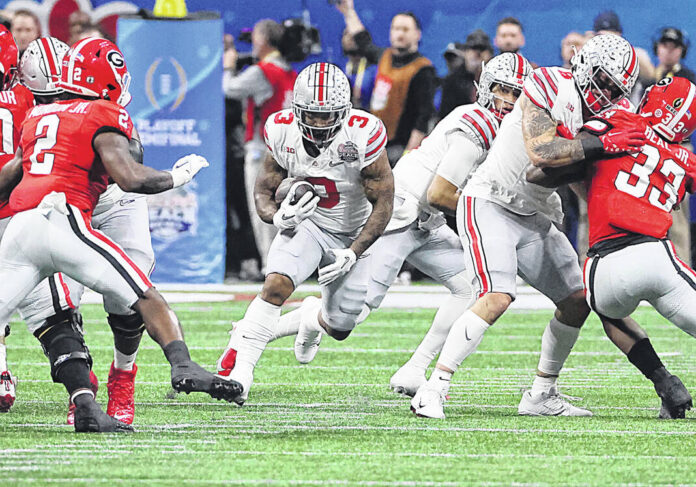 A grade card on Ohio State’s 42-41 loss against Georgia in a College Football Playoff semifinal game:

Quarterback C.J. Stroud played one of his better games this season, including rushing 12 times for 34 yards, highlighted by a 27-yard run on OSU’s last chance drive in the final minute of the game.

Marvin Harrison Jr. (5 catches, 105 yards, 2 touchdowns), Emeka Egbuka (9 catches, 112 yards, 1 touchdown) and Julian Fleming (5 catches, 71 yards) played at a high level consistently. Harrison’s exit from the game after a helmet to helmet hit, which was not called targeting, during the third quarter had a significant negative effect on the Buckeyes’ offense.

OSU’s running backs had only one run longer than eight yards and Stroud was sacked four times.

Ohio State forced Georgia to punt on its first two possessions of the second half but moments like that were too infrequent.

Georgia gained 533 yards of total offense and averaged 8.9 yards per offensive play. The Buckeyes had a 14-point lead in the first half and allowed two unanswered touchdowns by Georgia, then had a 14-point lead late in the third quarter and also let it get away.

It was a fake punt that appeared to gain the yardage needed for a first down. But something must have tipped off Georgia’s coaches. With its attempt at trickery discovered, OSU had to punt. On Georgia’s first play of the series after the punt, quarterback Stetson Bennett connected with Arian Smith on a 76-yard touchdown pass.

Noah Ruggles made field goals of 25 yards and 48 yards but missed on a 50-yarder that would have won the game for the Buckeyes and put them into the national championship game with four seconds to play. His successful 48-yard kick was the longest field goal of his Ohio State career.

When you go into the game without Jaxon Smith-Njigba and TreVeyon Henderson, lose Marvin Henderson and Cade Stover during the game, and can use Miyan Williams for only a few plays and still almost take down the undefeated No. 1-ranked team who is the defending national champion, you have played pretty well overall.

College football: Do Buckeyes have championship frame of mind?